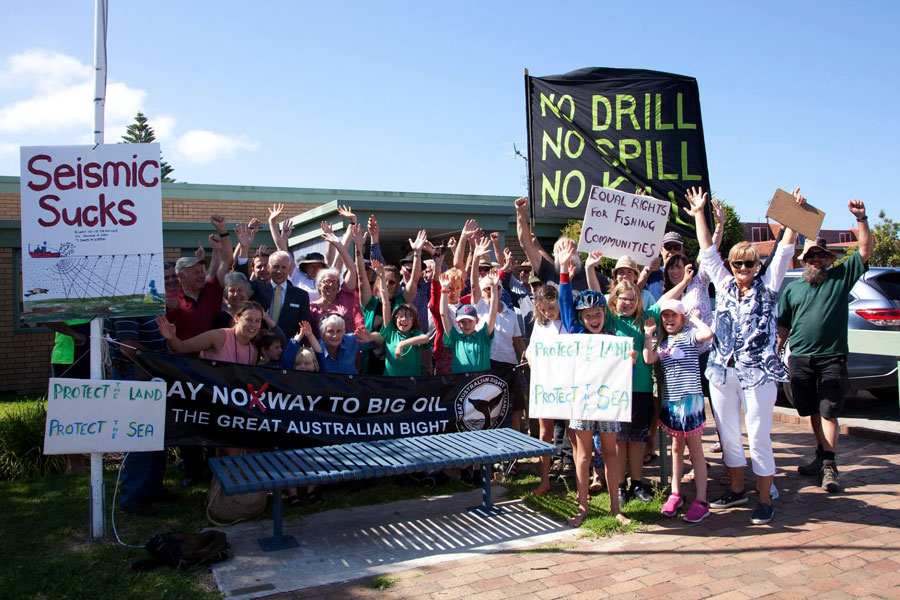 Last week the Colac Otway Shire Councillors voted in favour of high-risk oil drilling in the Great Australian Bight choosing to ignore the advice of their own Environmental Department. Councillors voted 4-3 against the petition to “Formally oppose oil exploration and drilling in the Bight”. The petition was signed by 1436 people and supported by 20 + individuals and community groups including the Victorian Rock Lobster Ass and the Apollo Bay Chamber of Commerce.

Councillors were first informed of the petition on 20th November 2018 and were repeatedly offered information and opportunities to talk or meet. None of these offers were taken up! Instead, the issue was handed to the councils own Environment Department seeking their recommendation to Council. The Environment Department recommended supporting the petition with a detailed document that pointed out the risks of a catastrophic oil spill and that the action was in line with our Councils own Carbon Neutral Policy.

Three Councillors, Stephen Hart, Brian Crook and Chris Potter argued passionately that council should support the petition but they were met with 4 no votes from Councillors Schram, McCracken, Hanson and Smith. Cr Smith was the only Councillor to explain his no vote, stating that the recommendations were biased by not providing the other side of the position, i.e. the oil company’s position.

Since the meeting I have been given a number of reasons for the ‘no’ vote. It’s not Councils business to interfere in an area where they have no jurisdiction. That they received the report only 5 days prior to the meeting. The facts provided in the Environment recommendations were not backed up/supported. Councillors felt threatened by the crowd’s behavior at the meeting and did not feel they could speak freely.

Councillors had more than 3 MONTHS to prepare for this meeting! Enough time to ensure the petition was given the time and consideration it duly deserved. To blame the Environment Officers who wrote the report is a classic passing of the buck! If Councillors wished to hear the alternative argument from Equinor, why wasn’t this requested? At least one of the Councillors received a phone call from Equinor, why didn’t the Councillor ask then?

I wonder, did Council require this amount of detail and back up when they supported the moratorium on fracking in the Shire? Did they think it was within their jurisdiction when they voted 5-0 to write to the Victorian Government and the Municipal Association of Victoria for support?

Apart from the risk of a devastating oil spill, there are some pretty compelling reasons to leave the oil under the ground in the Bight. We do not need to find new reserves of fossil fuels on this planet, especially in high risk areas such as the Bight. By the time Equinor has the oil wells in full operation (12 years from now) we are meant to be have transitioned to renewables! Apart from all the anthropocentric reasons for protecting the Bight, what about just leaving the Bight alone because it is amazingly wild and unspoiled? It is one of the very last refuges for 35 different types of whale and dolphins and countless other species that exist nowhere else on this planet. It is the Great Barrier Reef of the Southern Ocean only we haven’t stuffed it up yet.

I am ashamed and embarrassed by our Council. I thought this petition was a no brainer. We simply asked Council to write to State and Federal Governments, NOPSEMA and Equinor and inform them that Colac Otway Shire formally opposes oil exploration and drilling in the Bight; not a very arduous task. We weren’t asking our Council to be particularly brave or innovative either, we just wanted them to do what 15 other local councils along the coast have done. Including our neighboring Councils, Surf Coast and Corangamite. I do not except any of the excuses offered up by the ‘no’ voting Councillors. The Colac Otway Shire is now famous for being the only council in Victoria that has refused a request from its residents to ’Fight for the Bight’. May I take this opportunity to sincerely thank Councillors Stephen Hart, Brian Crook and Chris Potter for supporting the petition.