Why are lots of birds being washed up on our beaches? 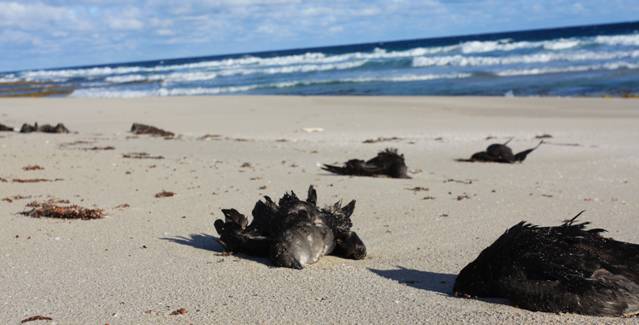 • The birds are called Short-Tailed Shearwaters (Puffinus tenuirostris) due to their amazing and efficient flight patterns which use the updrafts and pressure from waves to skim along the surface of the ocean.

• They would have to be one of the most extraordinary migratory animals in the world and annually cover a distance of more than 30,000 kms.

• They breed in large colonies along Victoria's coast in a number of locations including at Cape Woolami on Phillip Island and also at Griffiths Island near Port Fairy, and many Bass Strait Islands and Tasmania.

• They form large breeding colonies in sand dunes and build burrows in which they lay eggs and rear their chicks.

• Adult birds (and slightly later fully fledged chicks) undertake a spectacular annual migration that sees them flock together in Feb/March, then depart and migrate as far as the Bering Sea before returning to Victoria/Bass Strait/Tas usually around October/November to commence breeding (30,000 + kms) (Note: Limited knowledge of actual routes taken is available and the figure below is indicative only.)

• During breeding season adult birds fly to Antarctic Convergence to gather food (mainly squid) for their young, often leaving chicks in burrows for a week or longer.

• On returning to Australia after long migration north many birds return in poor condition and die soon after, washing up on ocean and bay beaches.

• While it appears like a lot of birds, the numbers of birds in breeding colonies can exceed millions and this natural mortality could be seen a mechanism for ensuring survival of the fittest.

• Potential contributing factors to the demise of birds may include storms encountered on journeys, availability of food resources, pollution or other poorly understood factors.

• Populations of birds in breeding colonies remain high and are not under threat at this stage.

A CALL FOR INFORMATION

The wreck of Short-tailed Shearwaters appears particularly abundant along the Australian coast this spring. The number of dead shearwaters lining the beaches seems to be higher and more widespread across the Australian coast, but unless we collect data and do this consistently, this is only an observation. With shearwaters representing the most globally abundant avian species, it becomes important to understand just how many die each season and what this means to overall numbers.

We would like to make a start toward greater understanding and to learn more about this year's wreck in particular. It has been suggested that changes in food availability due to the warming of the oceans is taking its toll on these migratory seabirds.

As regular beach visitors, you can play a role in helping us learn more about this issue. Over time we can learn whether mortality rates vary from year to year and if these trends are consistent, and/or linked with any particular climatic events or food availability.

When you next take a walk on a beach (albeit to look for breeding resident shorebirds!), please record: date, time, beach name, location, distance walked (ideally the latitude and longitude of your starting and finishing point), number of dead and dying shearwaters.

Email this information to atlaThis email address is being protected from spambots. You need JavaScript enabled to view it. at Birdlife Australia.