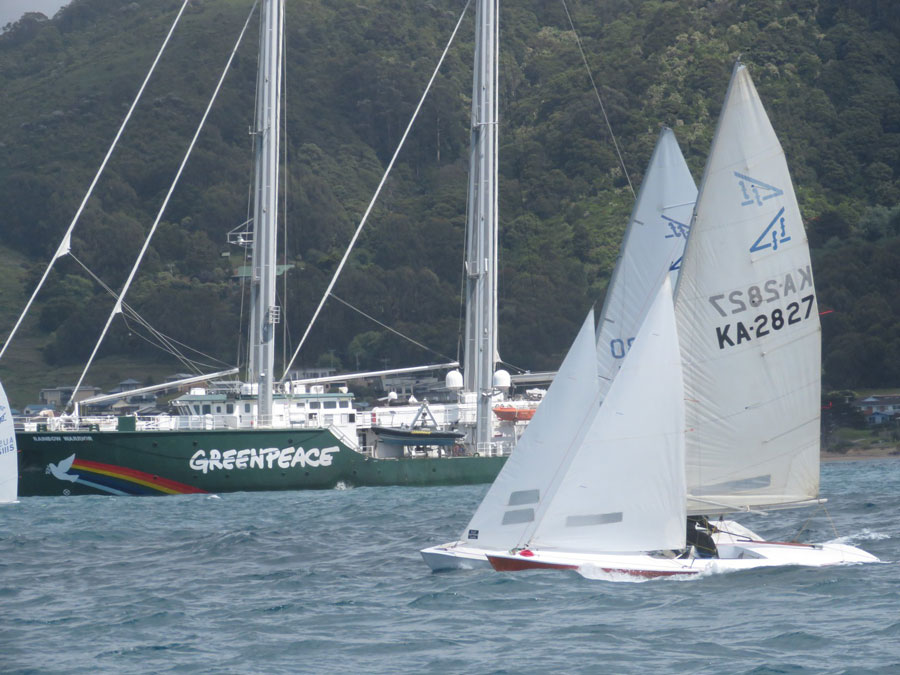 From the Crows Nest

It was a massive weekend of sailing for our club with the sailing ship Rainbow Warrior setting the perfect backdrop. Before I bunch into this weeks article a huge thanks must go out to the volunteers that made it possible. Lids and Shotty were rostered on as race managers for this 2 day event and it would be a formidable task. Fortunately, other members stepped up to the plate to share the burden. Russell and Andrew Smith spent two full days on the water. On Sunday some of our newest members made not only themselves, but their beautiful vessel the Ibis available as our start boat for the regatta. Allowing the Helena G with John Lindsay aboard to lay and rebate marks. Thank you also to out rostered shore duty crew Genevieve and John.

It was a weekend of firsts for our race management team. Suzanne Goodison’s Top Mark Flying 15 Classic series required 6 marks to be set for the course. Also for the first time a long course mark would be set for the larger keelboats off Skenes Creek. For years the larger keelboats have bemoaned the fact they were relegated to race around a small triangular course within the bay, those pesky little boats always in the way. “We want a long course where we can showcase our ocean passage skills they collectively cried!” With the upgrade of our Race Management vessel it would be possible to fulfil their wish. The pride of the Apollo Bay Sailing Club would strut their stuff for the folks at Skenes Creek.

Three vessels contested an even start; by the first mark Boheme had established a hardy lead over Wild Rose who were hotly followed by the old foxes on Interlude. At this juncture your scribe must offer his humble apologies to the residents of Skenes Creek for what was about to ensue was a near disaster. Boheme on the inaugural first rounding of our long course mark managed in yachting parlance something known as a Knit one Pearl one and the tangle was massive. I should say that the Knit one Pearl one is a yachting phenomena world wide, but unfortunately for the Boheme crew their tangle occurred 500 meters from a lee shore. Lee shore is a term that strikes fear into the hearts of all mariners. With little manoeuvrability they were drifting perilously close to that rocky shore. At this point many Skenes Creek residents were dialling Apollo Bay Ocean Rescue. Meanwhile back on Boheme the motor had been started to be put into gear if required. The 1st mate Gary was madly slashing at the offending brand new rope with their sharpest blade, a bit like a pirate on ice. Fortunately, disaster was averted.

The knit one pearl one episode had allowed Wild Rose to close the gap rounding the top mark just astern of Boheme with Interlude still hanging on to their wakes. Bill and the Wild Rose crew could smell blood, so decided it was time to set their spinnaker to drag them to the front of the fleet. The kite rose from the bag like a phoenix from the ashes to salvage some sailing club pride. Unfortunately the spinnaker was connected poorly and the sail wend up SIDEWAYS! Usually if this occurs crews are very quick to react and douse the offending sail, so as fellow competitors or the residents of Skenes Creek may not notice their blooper. The Wild Rose mob, however, chose to persevere for quite some time trying in vain to set the sail in this very abnormal configuration giving all and sundry time to take photos and have a good chuckle. It was left to the old boys on Interlude to raise the bar. They played the tortoise as the horses came unstuck reinforcing the saying “old age and treachery will always overcome youth (?) and enthusiasm”.

Meanwhile the Top Mark Flying 15 regatta was being contested. Three vessels from Port Phillip boosted the fleet to 8 boats. Shirelee’s day ended before racing began, a broken forestay forcing them to limp back to the harbour. Geeks and Gary Summers sailing Ziff showed the fleet a clean wake clinching all three races.

On Sunday the classic army work boat the Ibis resplendent with The Club burgee flying from the masthead was ably assisted by the Helena G to run 5 perfect races for the 7 boat Aussie McCutcheon fleet. It was the visiting boats that snatched the silverware, however, the locals were not disgraced. April Dancer battled gamely all day, the shorter courses proving testing. In race two only a minute separated the boats. Affrodite had her moment in the sun only to have the wheels fall off in the final two heats. Miss Molly after blowing a kite on Saturday came out with a borrowed spinnaker, which they tried some prawning with in one of the heats. The big improvers for the day were Shiralee. The Dutch dynamic duo had something to prove after their early exit on Saturday. In the last two race’s they were worthy winners amongst the locals in only their second outing.

The Rainbow Warrior with its massive sail plan set, sailed off into the sunset to draw the curtain on the weekend. 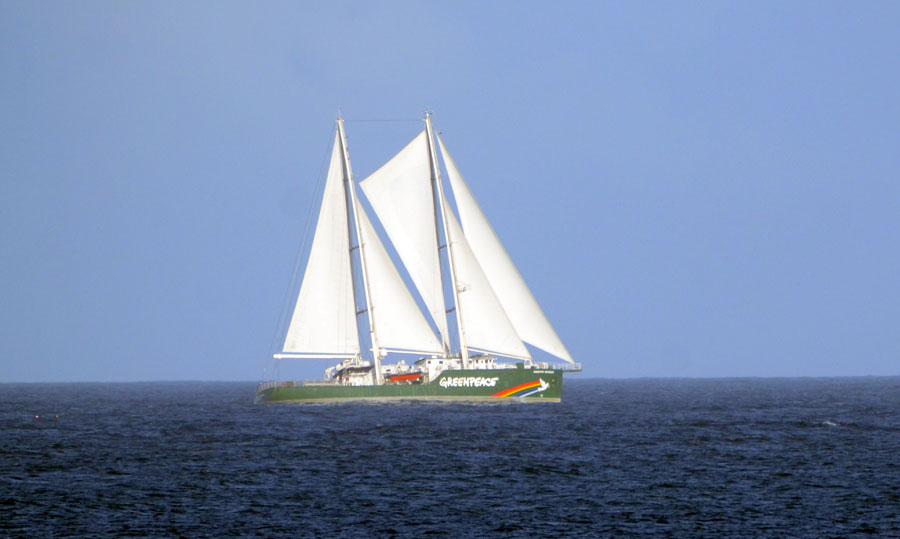